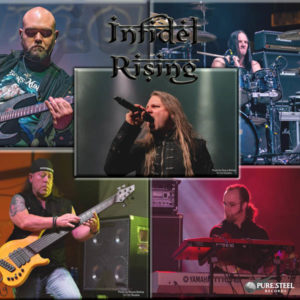 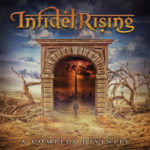 INFIDEL RISING was started in 2012. It was originally a passion project of vocalist and composer Travis Wills. who was inspired to infuse Dallas, TX’s metal scene with a more progressive sound in the vein of FATES WARNING.

He coerced drummer Wayne Stokely (ex-MILLENNIAL REIGN, ex-PRETTY BOY FLOYD) in 2012 to help him make it happen. Travis and Wayne spent the next two years writing new songs and creating demos. They recruited more players and built a solid lineup to start actively playing live in venues in Dallas, Fort Worth, Houston, and Austin.

In 2015 INFIDEL RISING released its first album The Torn Wings of Illusion independently. In 2016 The Torn Wings of Illusion was re-released by Alone Records as a limited edition DigiPak and made available in the UK. This resulted in positive acclaim and a growing European fanbase. IR was also featured in Metal Invader, a music magazine based in Greece, and has been played on Greek Metal Devastation Radio.

In 2016-2017, schedule conflicts, creative clashes and health problems in the band caused INFIDEL RISING to go on hiatus and seek changes in their bass, guitar and keyboard lineup.

It was important for Travis and Wayne to find musicians who could be creative partners, not just players. Fortunately the timing was right in late 2017 with the disbanding of POWER OF OMENS, another Texas-based power metal band. Bassist Chris Herring (Power of Omens, Dreamstate/Mindgallery) was recruited in 2017. Eclectic musicians David Gallegos (Guitar) and Rick Read (Keyboards) stepped in for some live shows and helped get the writing vibes flowing again.

Meanwhile, original guitarist Rafael J Quintana Rivera had gone on to fuel his other band Parallel Dimensions. Aaron had finished college and was actively working as an organ player for a church. But in the  summer of 2019 Infidel Rising once again reunited with Rafael, bringing him back on guitar and Aaron Walton was excited to jump back in on keyboards.