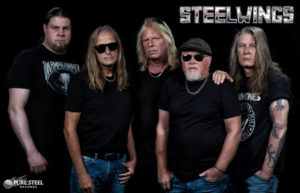 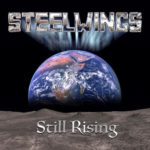 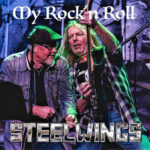 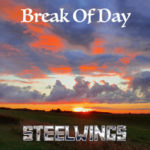 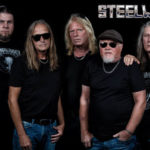 STEELWINGS hail from Sweden and play classic hard rock/heavy metal with roots firmly from the eighties. They were formed in 1982 and were part of the FWOSHM (First Wave Of Swedish Heavy Metal) being very active throughout the eighties and at the beginning of the nineties. The band played a lot of gigs during this time and much of their material was recorded and released in different forms. This was the time before the Internet, so the music was spread by tape-trading. In 1983 the band went to England and recorded two songs for Ebony Records and the song Live Your Life is featured on their ‘Metal Plated’ compilation album. Today these recordings, and other past material, are available to hear on Spotify. They also appeared on the charity record Swedish Metal Aid, together with other Swedish heavy rockbands such as Europe, Treat and Heavy Load. In 1989, the bands last album before their hiatus, entitled „Steelwings“, was released both as LP and CD on the Air Music Scandinavia label.

In 2007, the local city of Markaryd celebrated it’s 700th year and the band was asked too play some songs at this event. The guys got together again and this was the beginning of a new era for STEELWINGS. Although some years passed, eventually they started to work on a more regular basis. New songs were written and the group started playing regular live shows, amongst others, in 2015 at the Muskelrock Festival in Sweden. The wish to release a new record grew stronger and the search for a record deal began. Finally STEELWINGS landed a deal with Sliptrick Records and the new album „Back“ was released worldwide 26 February 2019, both as CD and a limited edition red vinyl. The album was well received and put the band back on the hard rock map.

A number of shows were planned to promote the album, but due to the pandemic these were canceled. Instead the band got into writing mode, and an album was written and recorded. This time the band have joined forces with Pure Steel Records for worldwide release of the strong new album called „Still Rising“.

STEELWINGS current line-up features Tommy, Michael and Gert-Inge who have been in the band since the beginning.