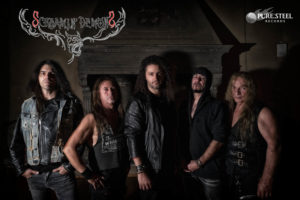 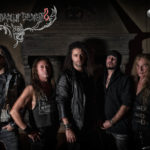 Screamin’Demons were born in 2021 thanks to the reunion of 3 of the historical members of the iconic band Death SS which recorded the most successful records in the 90s and which are still considered milestones of world metal today.

With the “Heavy Demons” albums and the Live “Cursed Concert” they wrote important and indelible pages of metal history.

Andy Barrington, Ross Lukather and Al Priest are still regarded as legends by the audience following the genre today.

They therefore decided to join forces and give life to this new project that wants to bring the essence of metal back to life with a current vision without forgetting their roots.

Together with the guitarist Luca Ballabio (well known in Italy as a professor at the CPM music academy, the most important and renowned in Italy) and to be part of the best European tribute to VAN HALEN and to Alessio Spini, a young and powerful singer discovered thanks to his tributes to Judas Priest and Deep Purple, give life to the new Screamin’Demons project by naming their sound SUPERMETAL and their path as THE NEW ERA.