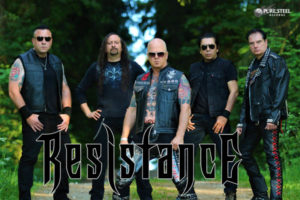 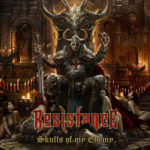 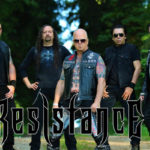 Skulls Of My Enemy was recorded at the band’s own studio, The Metal Room, and mixed and mastered by Ronald Sandoval at Rev Studios in Chino CA.

RESISTANCE are a Los Angeles Heavy Metal band known for delivering a full on Metal assault from a broad range of influences – U.S. Power, Traditional, Thrash, and Classic Heavy Metal are genres often used to describe the band. The core of RESISTANCE (Paul Shigo, Matt Ohnemus, and Dan Luna) was born in their teenage years – and they collaborated in several different bands, lineups, and names before officially forming RESISTANCE in January of 2000.

In 2022 the band inked a deal with Pure Steel Records (Germany), to release their latest studio album, „Skulls Of My Enemy“

Throughout the years RESISTANCE performed around the world on stages and festivals both nationally and internationally including Germany’s „Head Bangers Open Air“, Greece’s „Up the Hammers Festival“ Milwaukee Wisconsin’s „NYDM Spring Bash“ Nicosia Cyprus’ “Power of the Night Festival” Lima Peru’s “Lima Metal Fest” and Ventura California’s „Frost and Fire Festival“ all while gaining Legions of loyal fans worldwide.