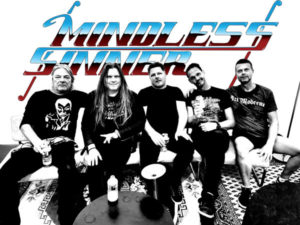 Started out as a gang of five way back in 1981 Mindless Sinner hailing from Linköping, Sweden.

Playing around their hometown gaining and building up quite a good reputation as a band.

The record label Web Records/ Fingerprint didn’t show too much of an interest in the band so the collaboration ended in 1986.

Changed their name to just Mindless in 1987 after teaming up with a local record label Delta recording.  The album “Missin’ Pieces” was released  in jan -89 with the single “Heaven will know” taken from the album the band started to tour around Sweden to promote the album.

At that time there was to much struggle for the band in order to survive so the band split up at the end of 1990.

Fast forward to 2001 the band re-formed as Mindless Sinner to celebrate their 20th anniversary and played a gig at a local MC club nov 3rd 2001. That also resulted in a gig at the Motala Metal Festival 2002

After that the band disbanded again.

In 2003 Master Of Evil , Turn On The Power and Missin’ Pieces were released on CD for the first time. With lots of  goodies and extra stuff.

In dec 2013 the band was asked to play at the Swedish festival Muskelrock 2014 to celebrate the 30th anniversary of the Master Of Evil release and the band said yes. It was a huge success for the band and they gained some European dates to play in Spain, Germany, Greece and the UK.

The band also felt tempted to try and record some new stuff for a possible new album.