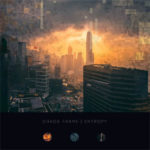 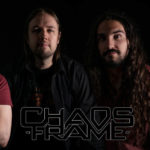 Chaos Frame was born in 2010 from one man’s dream to play a ton of notes. Shredding at an early age, founder Matt Hodsdon first became known to midwest audiences as the lead guitarist of Noble Beast. While the band developed cult status, Hodsdon’s interests extended beyond power metal, and he set about writing his own prog metal debut which would become 2011’s „Another Life.“ There were to be no rules for the band – just a raw channeling of every musical influence he had ever had, metal or otherwise. This turned out to be quite a lot.

Seeking a vocalist who could sing the impossible, Hodsdon was put in touch with powerful tenor Dave Brown through the Andy Sneap forum. They recorded as a duo over Skype, and after a laborious year of self-production, released „Another Life.“ The album could be accused of many things, but lacking ambition wasn’t one of them; the songs were filled to the brim with rapid time signature changes, key changes, and style shifts, culminating in the monstrous 19-minute title track, all of it seemingly held together by a thread. Hodsdon and Brown agreed that they had gone too far, and have been trying to contain the insanity ever since. Around this time, Hodsdon brought in fellow MN local Andy Xiong (Happy Metal) on guitar.

With no particular obligations to fulfill, and Noble Beast still playing regularly, creating the follow-up to „Another Life“ was a gradual process. 2015’s „Paths to Exile“ was an improvement in every regard, with a polished production by Carlos Alvarez (Power Theory,) blistering session drums from death metal savant Pat Ruhland (Obsolete, Australis,) and significantly tighter songwriting. Still, things had a way of getting out of control, and Chaos Frame was now becoming known for dense compositions and strange genre bending, not to mention their unusual heaviness for a power-prog band. There was never a conscious effort to compose difficult music; it just seemed to come out that way. The one goal was to make cohesive songs, and this time they were largely successful. Lance King (Pyramaze, Balance of Power) picked up the album for his record label, and later invited Hodsdon to join his solo band.

2016 was a year of tragedy. Disturbed by the random murder of a close friend, and adrift after the scandalous breakup of Noble Beast, Hodsdon suddenly found himself isolated and without purpose. After a two-year period of inactivity, he reentered the musical world by contributing three songs to Lance King’s „Reprogram,“ and soon began work on a new album. It is this period that informs the darker sound and subject matter of „Entropy.“ The previous Chaos Frame lineup recorded all their parts, but the band still needed a permanent drummer to finish the album. In a great stroke of luck, they happened upon local drummer Andrew Julkowski, who not only could play the demanding parts, but was a great writer himself. He agreed to join, and the third album was soon finished. Despite the band’s long absence, fans still often ask about a new album, and they will not be disappointed! At long last, Chaos Frame is back and ready to delight/torment audiences once again.